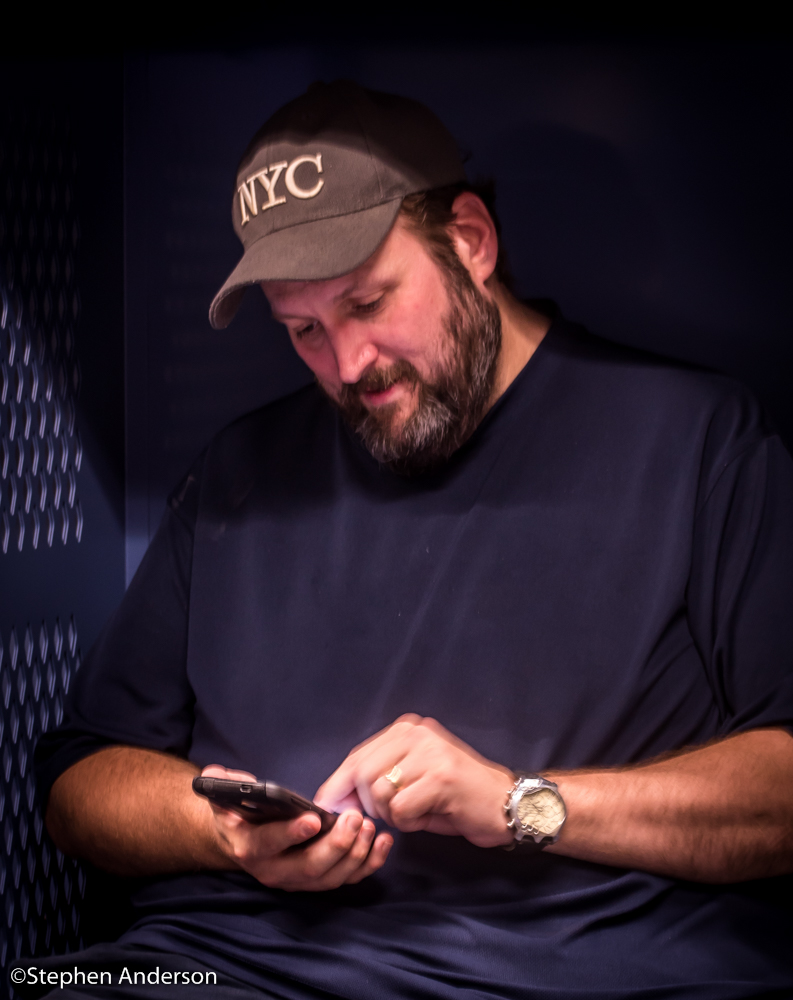 Johnny Cole (a long-time music journalist/music archivist/media & press liaison on various tours) has spent a huge part of his life pursuing his dream of searching for great music. Since his first concert on January 20, 1973, in Mobile (AL) to see Elvis Presley, he knew music would become a major part of his life. During the 1980’s-90′s, he lived in New York City and Washington, DC (area), but has since returned home to his southern roots (Johnny was born in Gulfport, MS).

Beginning in the 1980’s, he was part of the once cutting edge “Underground Music Press” and a number of other music-themed outlets. He also developed and co-managed the once largest and busiest MSN Web Entertainment Group, which held that position for 3 1/2 years in the early 2000’s. In the fall of 2013, he launched The Southland Music Line with photographer Stephen Anderson and artist Robby Amonett, which has continued his search for new and exciting music (now in it’s 9th year).

Johnny has circled the globe and traveled thousands of miles following a variety of tours and attending live music events. By invitation in 2017, he traveled to Australia and New Zealand for the Bruce Springsteen & E Street Band Tour. In recent years, he has followed and worked on several tours by such music artists as Tom Petty & The Heartbreakers, U2, Foo Fighters, Phil Collins, Roger Waters, Fleetwood Mac, Jeff Lynne’s E.L.O. and more. Prior to the Covid 19 pandemic, it was common for him to attend more than 300 (both “job related & non-job related) shows each year.

Johnny has written about numerous live music venues including the infamous New York City club CBGB (and its owner Hilly Kristal), Maxwell’s in Hoboken, NJ, The Stone Pony in Asbury Park, NJ and The 40 Watt Club in Athens, GA. In recent years, Callaghan’s Irish Social Club (Mobile, AL), The Peoples Room of Mobile (formerly The Listening Room of Mobile), Jack’s by the Tracks (Pascagoula, MS) and The Frog Pond at Blue Moon Farm (Silverhill, AL) have been featured in many articles.

He has a lasting love for the Athens, Georgia Music Scene dating back to around 1980 with bands like R.E.M., Pylon, Love Tractor, Flat Duo Jets and more. Johnny’s love for Asbury Park, NJ and the music of Bruce Springsteen have been a major part of his life since the 1970’s. Those who personally know Johnny, also know of his love for New York City and its colorful history.

In 2016, Johnny hosted the TV show “Music Scene” – A celebration of the Gulf Coast music scene. A show co-hosted with Stefan Lawson and produced by Steven Dale. He has also appeared in countless podcasts and on radio.

He and his wife of 33 years presently call the Mississippi Gulf Coast their primary home, though Colts Neck, NJ and Braddock Heights, MD are considered homes, too.

During these “times of change”, Johnny continues to write, research music history, archive historical data, teach and hopefully motivate others to discover a wide range of topics and ideas in the world of music. 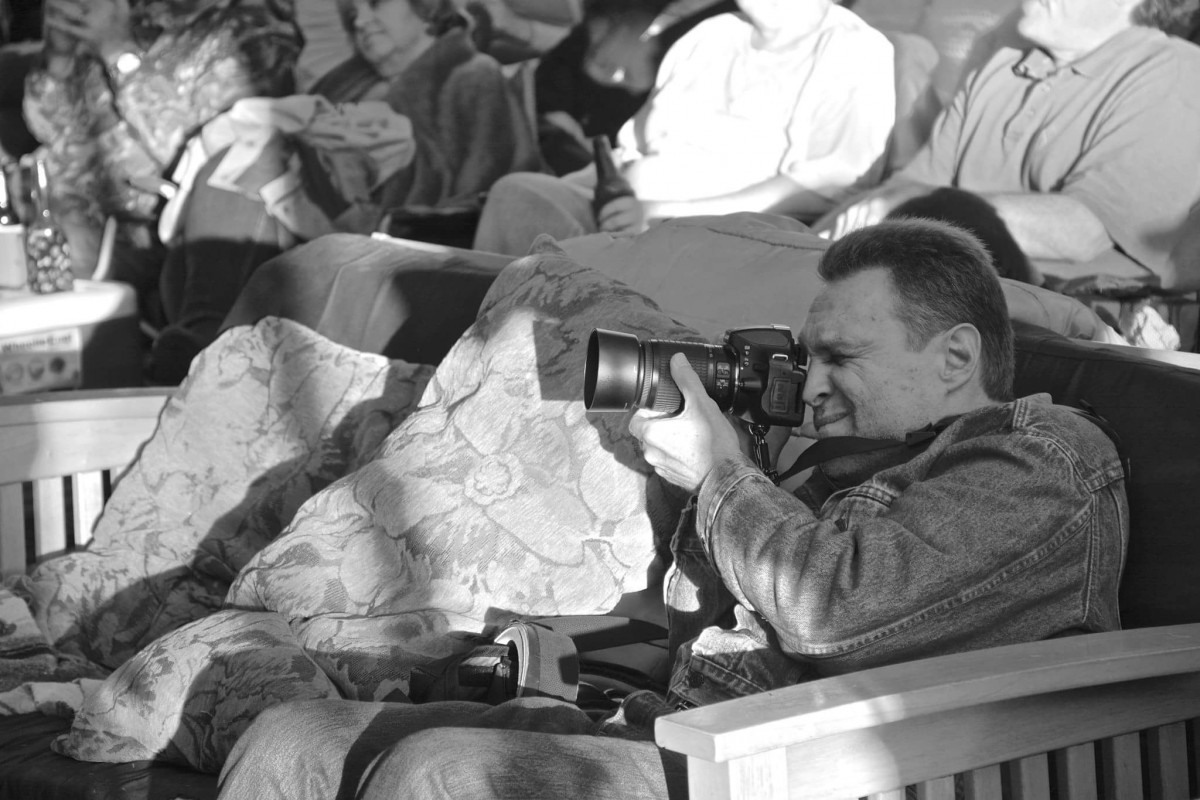 Musicians looking down from stages along the Gulf Coast may see a familiar and friendly face – partially blocked by a Nikon camera that may have seen as much action as they have.

Stephen C. Anderson (known as “Andy” to his many friends) has for years used his exceptional eye and and a variety of lenses to document the many inspiring musical moments that happen from the Gulf Coast and the Region.

With a gentle smile and a respectful nod, he dips his eye behind his viewfinder, night after night. His ears catch every note, his hips every beat, while his eye searches for that special, elusive moment. A split-second, he says, can live forever, either in the memory or in a photograph.

“I feel I’m like I’m capturing a moment that can never be captured again,” Anderson said. “In a live performance, things happen that you can never expect.”

Anderson, a California transplant who landed in Pascagoula, MS in his teen years in the 1960s, has continually documented the musical heritage while honing his own craft.

Always artistic by nature, Anderson first became interested in photography when he saw the stunning landscapes of the legendary Ansel Adams and the gritty street documentaries of Henri Carter Bresson. He studied Radio, TV and Film at the University of Southern Mississippi (while earning a degree in Speech Education) and at the Artography Academy in North Hollywood, Calif.

His favorite photographers include Jim Marshall, Baron Wolman and Robert Knight. Another influence was fashion photographer Alfredo Demollie, who became a close friend and mentor.

Over the years he has been up close to photograph such musical greats as The Police, Johnny Cash, Boz Scaggs, Crosby, Stills and Nash, the (original) Allman Brothers Band, Dr. John, Slash, B.B. King, James McMurtry, Ray Wylie Hubbard, Marty Stuart, Lukas Nelson, Larkin Poe, and thousands more. In 2017, his photograph of Jimmy Buffett was used for the cover of the book “Jimmy Buffett: A Good Life All the Way” by Ryan White. In recent years, he has also photographed at the Bogalusa Blues & Heritage Festival, Sun Radio Sessions, South By Southwest, Bentonia Blues Festival and can be regularly found taking photos at the highly popular Frog Pond at Blue Moon Farm.

Though he’s paid his share of cover charges and ticket prices over the years – and enjoyed the perks of the laminated passes that vaunted shooters such as he often enjoy – Anderson says he’s thankful that many venues along the Gulf Coast continue to offer free live music.

Click Here to visit for his most recent photos. 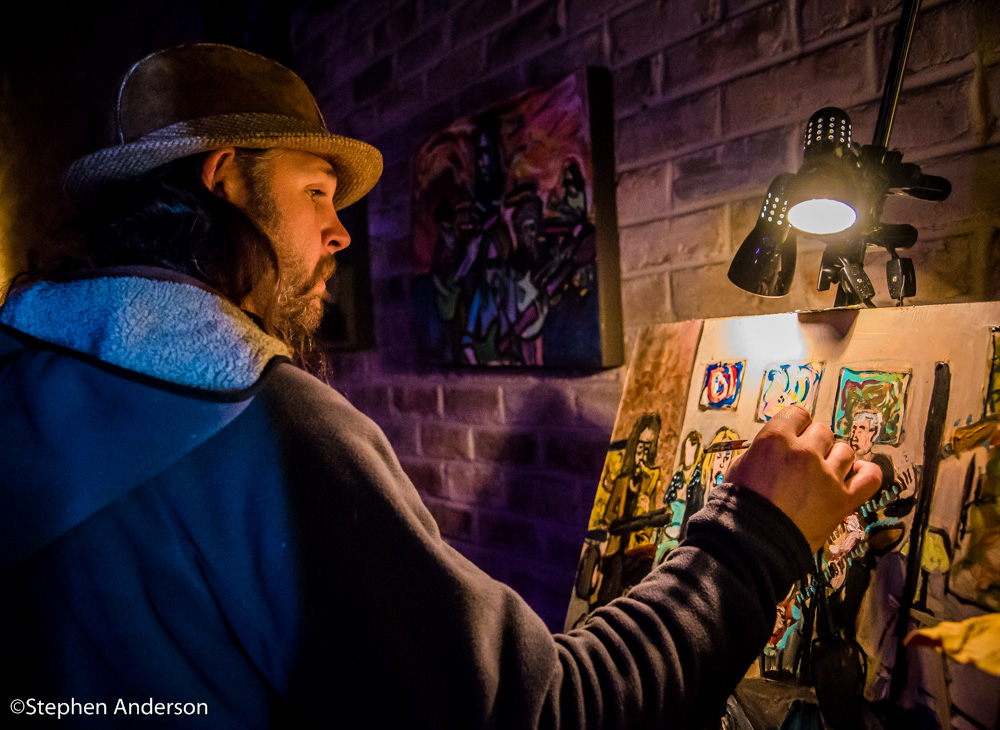 Robby Amonett has been featured in magazines, newspapers and articles in both print and online. His story has been told in great detail by many, and it is truly one worthy of knowing. His interesting past to his present work as an artist is a story one never tires of hearing. Robby paints countless numbers of bands and artists across the region and does so in real time as they perform. He has painted such bands and artists as: Alabama Shakes, Willie Sugarcapps, Rosco Bandana, Wet Willie, Soul Asylum, Hurray for The Riff Raff, Shovels & Rope, The Mulligan Brothers and many more. The Southland Music Line wanted Robby to be a part of this site because, first of all he’s one of the nicest guys around, and secondly, because of his incredible talent. His passion and love for music, friends and, of course, art makes him a favorite to many. His work will be displayed here in coming months and will also be available for purchase. So often fans come to the shows and want a painting of his, but are not able to get one on that given night; well now they will be able to purchase his art whenever the time is right for them. More details are coming soon.