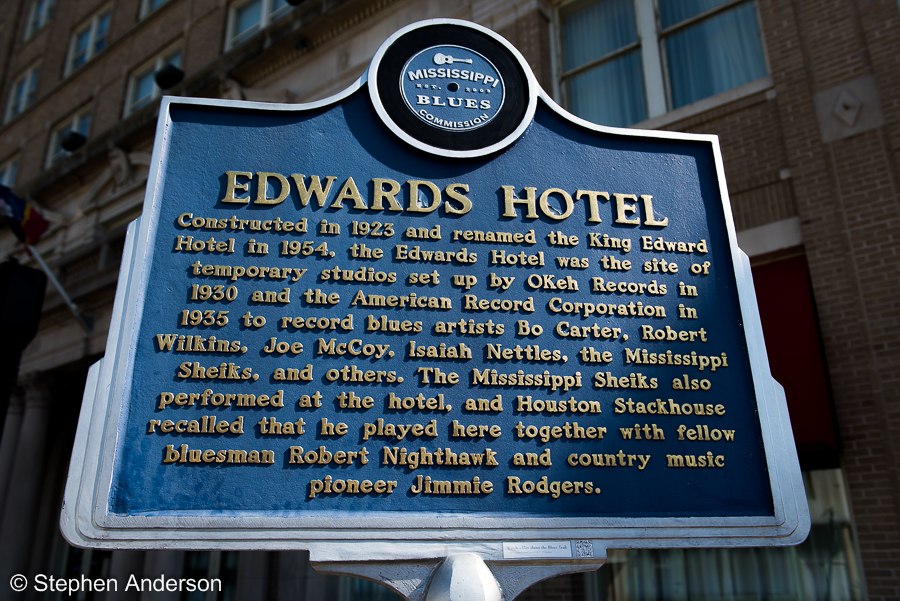 The Southland Music Line continues our Mississippi Blues Trail Series at the marker recognizing the Edwards Hotel at 235 Capitol Street in downtown Jackson, Mississippi. One of Jackson’s historically most famous hotels is also the site of performances by legendary music artists and several early blues and gospel recordings.

The location of this hotel has a long history dating back to the Civil War. The first hotel on the site, the Confederate House, was built in 1861 by “Major” R.O. Edwards. After its destruction by Gen. Sherman’s forces in 1863 it was rebuilt in 1867 as the three-story Edwards House. In 1923, a new luxurious, twelve-story building was constructed as the Edwards Hotel, which became popular to both locals and those traveling to the capital city on business. The Edwards Hotel was sold to R.E. “Dumas” Milner and renamed Hotel King Edward in 1954. The hotel was placed on the National Register of Historic Places in 1976. In December 2006, Watkins Partners, former New Orleans Saints running back Deuce McAllister and Historic Restoration Inc. of New Orleans formed a partnership to restore the King Edward and after extensive $90 million renovation was reopened in 2009 as the Hilton Garden Inn.

Prior to World War II, it was a common practice for major recording companies from the North to set up temporary studios in hotels in the South, thus allowing Southern-based artists a nearby place to record. The Edwards Hotel was the site of a temporary studio set up by OKeh Records in 1930 to record such blues and gospel artists as Bo Carter (born, Armenter Chatmon), Charlie McCoy, The Mississippi Sheiks, Elder Charlie Beck, Caldwell “Mississippi” Bracey, and others. 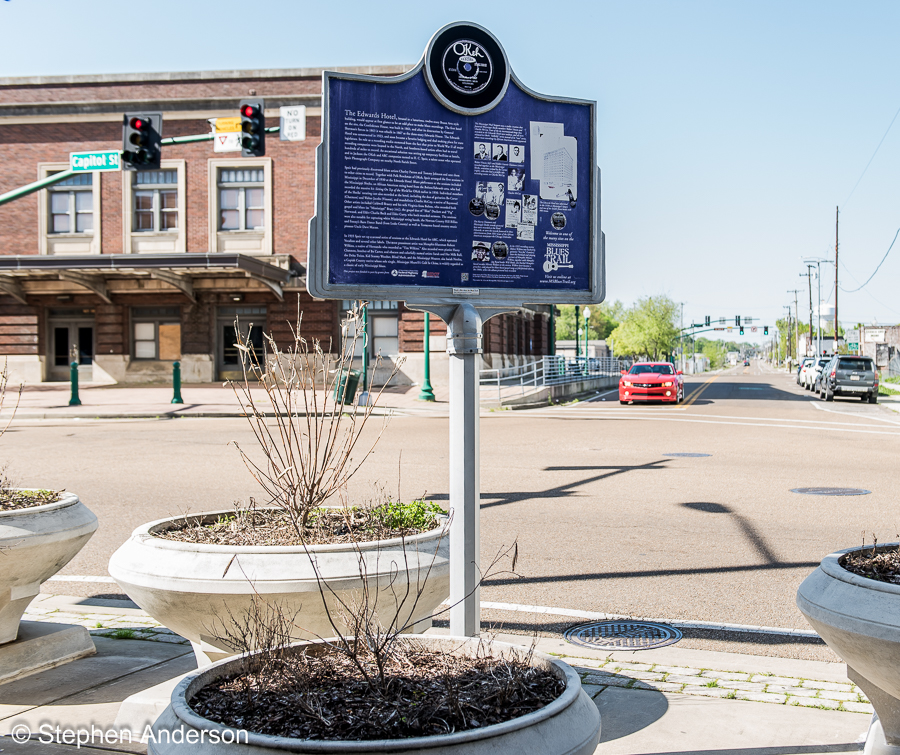 Several artists who performed at the hotel included The Mississippi Sheiks, the popular band from nearby Bolton, Mississippi who had recorded the massive hit “Sitting On Top of the World” for OKeh earlier in 1930. Some others to perform at the hotel were Houston Stackhouse, fellow bluesman, Robert Nighthawk and country music pioneer Jimmie Rodgers.

While in Jackson, record companies like Okeh and ARC always turned to H. C. Speir (1895-1972), a talent scout who operated Speir Phonograph Company on nearby North Farish Street. (Spier has an official Mississippi Blues Trail marker located at 225 N. Farish Street.) Together with Polk Brockman of OKeh, Speir arranged the first recording sessions at the Edwards Hotel in December of 1930. No longer was there a need to send artists to other cities to record. 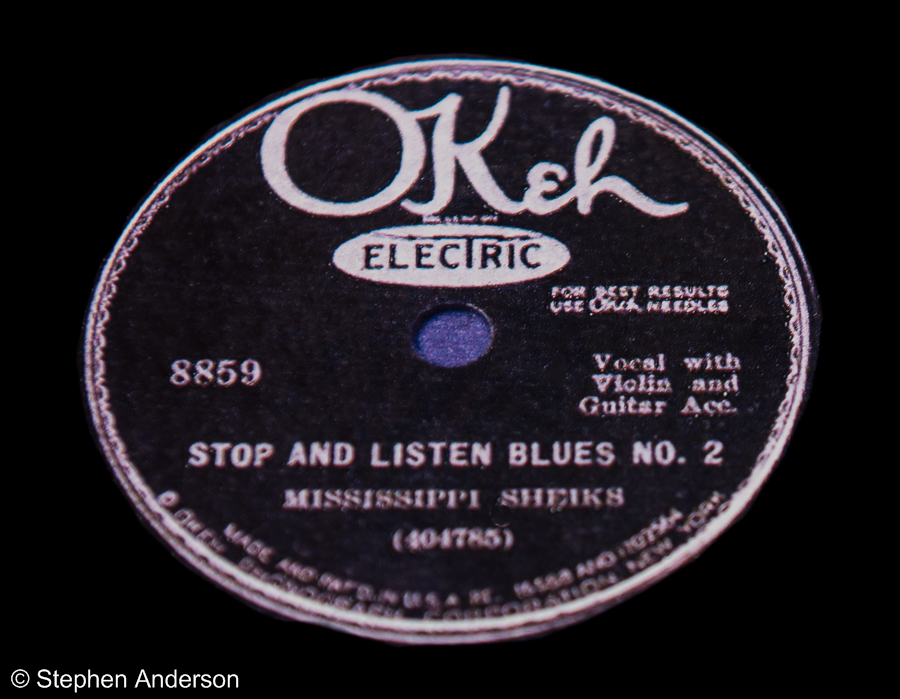 The legendary band, The Mississippi Sheiks, recorded for Okeh Record at Edwards Hotel in Jackson, MS

In 1935, and originally believed to had been at the Edwards Hotel, Spier would further set up recording sessions at the Crystal Palace on nearby Farish Street for Brunswick/ARC, which operated Vocalion and several other labels. Among those to record there were Memphis bluesman Robert Wilkins (who recorded as “Tim Wilkins’), pianist Harry Chatmon (brother of Bo Carter), Sarah and Her Milk Bull, the Delta Twins, Kid Stormy Weather, Blind Mack, and the Mississippi Moaner (aka Isaiah Nettles), whose single “Mississippi Moan/It’s Cold In China”, is widely regarded as an early Mississippi blues classic.

The Southland Music Line invites you to read our many articles spotlighting The Mississippi Blues Trail with more articles coming. 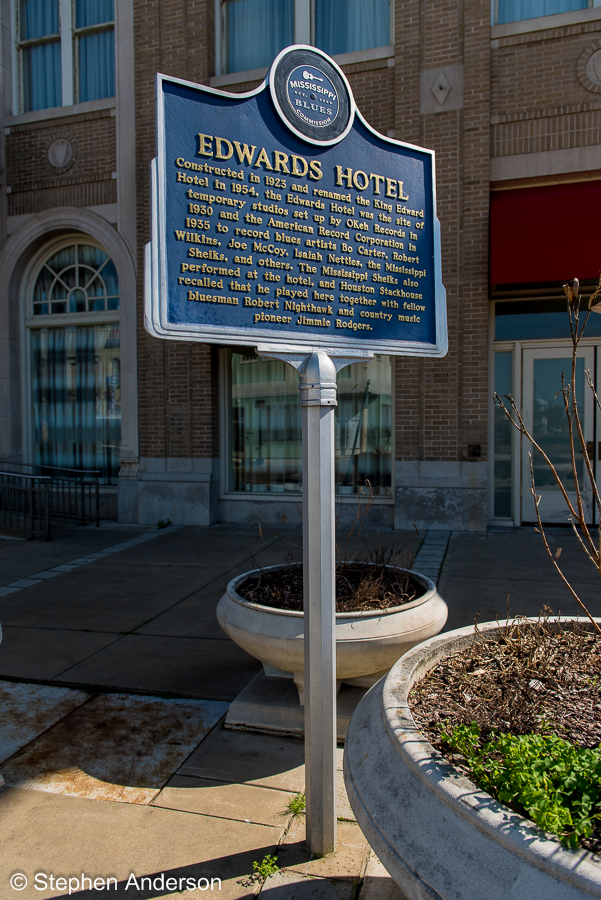 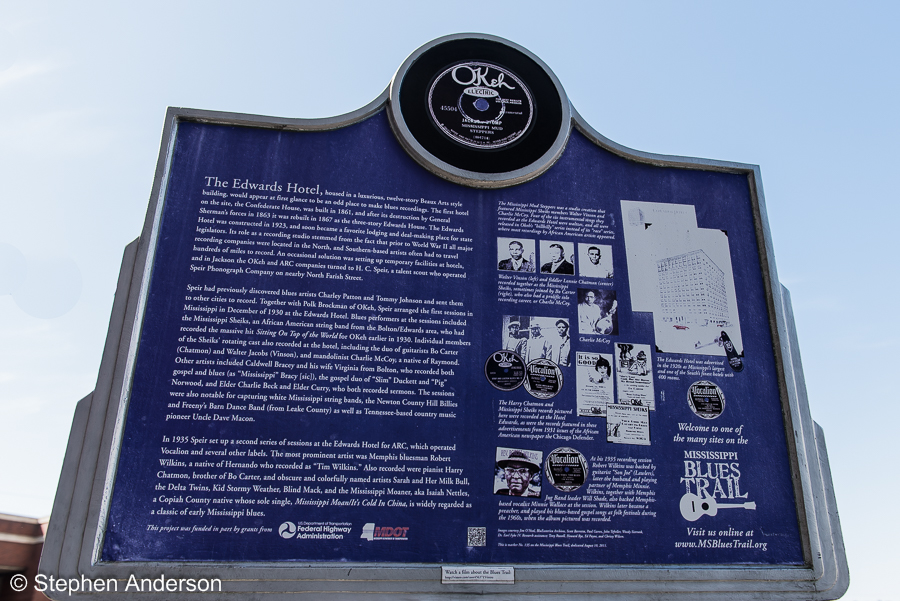 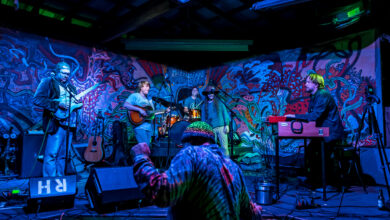 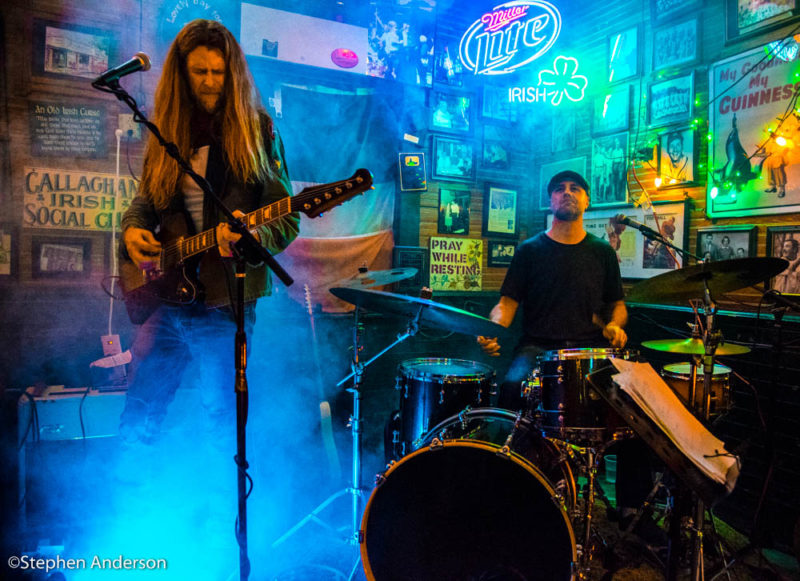 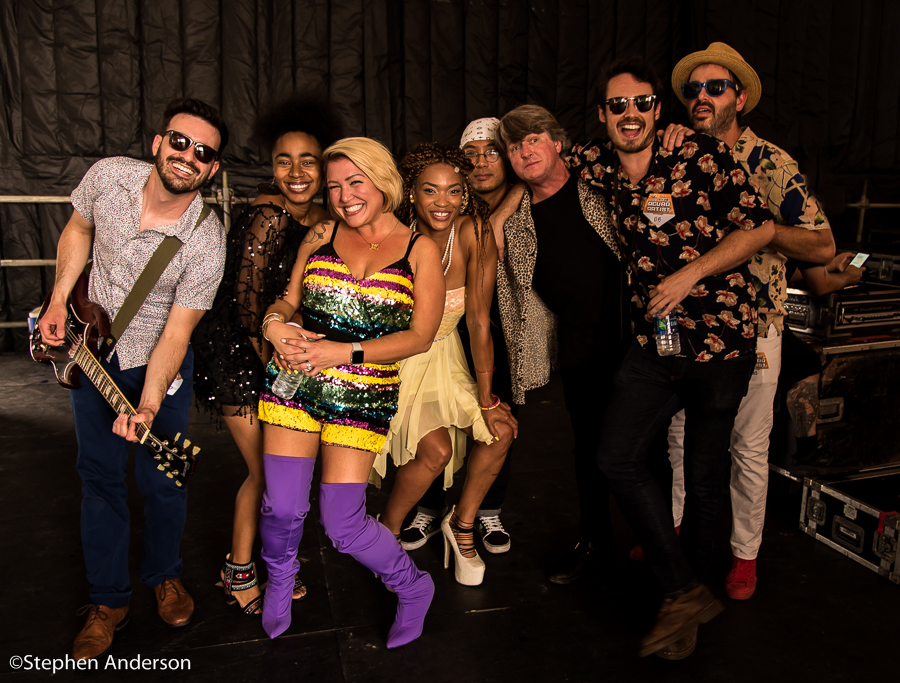