The Delta Blues Museum (DBM) resides in its third and permanent location of the restored Y&MV/Illinois Central Freight Depot at No. 1 Blues Alley in downtown Clarksdale between the Ground Zero Blues Club and the Delta Blues Museum Stage. Mississippi’s oldest music museum and the first worldwide to focus exclusively on the blues, originated in 1979 as part of the Carnegie Public Library and is “dedicated to creating a welcoming place where visitors find meaning, value, and perspective by exploring the history and heritage of the unique American musical art form of the blues.” The museum receives visitors from nearly every state in the U.S., thirty-four countries around the world annually and is a recipient of the National Medal for Museum and Library Service. 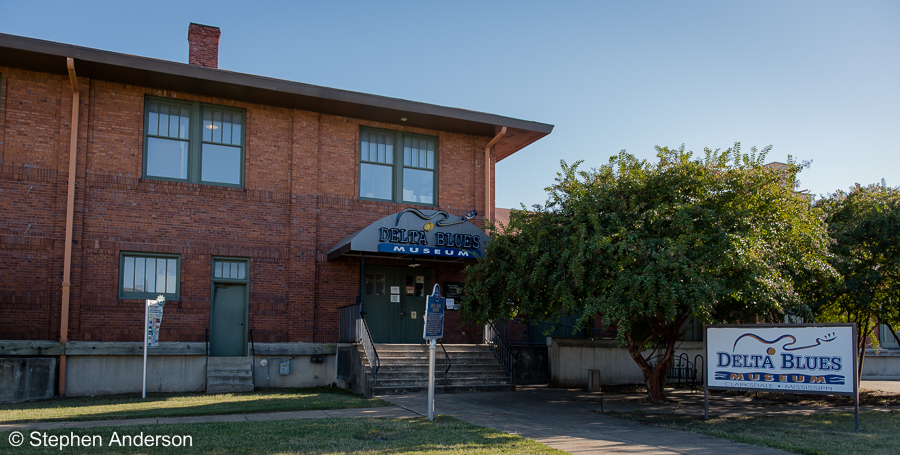 In 2012 the museum added a 7,300 sq. ft. section to the original 5,300 sq. ft. footprint of the depot, naming it the “Muddy Waters’ Wing,”. This addition houses one of the Museum’s most notable exhibits – Muddy Waters’ (born McKinley Morganfield, 1913-1983) original cabin where musicologist Alan Lomax first recorded Waters for the Library of Congress in 1941. The structure, which Waters occupied from the age of three until he journeyed to Chicago in 1943, has been faithfully reconstructed with the original cypress boards of his sharecroppers cabin, formerly located on the Stovall family plantation outside Clarksdale.

In 1989 guitarist Billy Gibbons of the ZZ Top band enlisted Pyramid Guitars in Memphis to build several “Muddywood” guitars constructed from fallen cypress timbers that had originally been part of Muddy Waters’ cabin. One of the guitars was displayed at Hard Rock Cafes around the world by Gibbons as a fund raiser for the museum and later became part of a permanent exhibit in the Muddy Waters Wing. Best known for electrifying the blues in Chicago, Muddy Waters is also remembered with posters, photographs, and a life-size wax statue in the museum.

Legend has it that Muddy Waters took his name from the muddy Deer Creek, a periodic tributary of the silt laden Sunflower River during heavy rains. As his friend and protégé Eric Clapton said of him, “Muddy Waters’ music changed my life, and whether you know it or not, and like it or not, it probably changed yours, too.”

Additional interesting displays include a James “Son” Thomas’ sculpture of a woman in a coffin made of Yazoo River clay, suits worn by Eddie Cusic, E B Davis, and Pinetop Perkins, W. C. Handy’s autograph, The Jelly Roll Kings’ autographed wooden shoes from Holland, posters celebrating over twenty-five years of the Sunflower River Blues & Gospel Festival and an exhibit of award-winning journalist Panny Mayfield’s photographs, “Live From the Mississippi Delta” detailing her decades long career of photographing blues and gospel musicians at festivals, clubs, churches, and juke joints in the Delta.

The Delta Blues Museum sponsors an arts and education program designed to continue the Delta Blues musical tradition. Students may choose to play guitar, harmonica, keyboard, bass guitar, fife, drums, or any other blues instrument. Public performance opportunities enable participants to share their achievements with the community. In 2014, the DBM was one of twelve youth programs recognized with a National Arts & Humanities Youth Program Award. While the museum’s education program has trained many young musicians to carry the blues into the future, the Delta Blues Museum, itself, has become a world-renowned attraction, honoring and preserving the historic blues of the past and present.

Sunflower River Blues & Gospel Festival – Clarksdale
Bounded by the Mississippi River to the east and cut through its heart by the Sunflower River, Clarksdale was the beneficiary of their rich floodwaters and the formation of a fertile agricultural Delta which became the cradle of the blues. One of American Primitive guitarist John Fahey‘s most expressive songs is “Sunflower River Blues,” from his1963 album, “Death Chants, Breakdowns and Military Waltzes” expressing a deep connection to the ebb and flow of the river and the old blues players of its muddy shoals.

The Sunflower River Blues & Gospel Festival is a three day event held annually during the second weekend of August at the Delta Blues Museum stage on Blues Alley. Featuring nationally known and homegrown performers it annually attracts upwards of 25,000 blues enthusiasts from all over the world. The Sunflower River Blues Festival evolved from the free Holiday Music Festivals sponsored in 1986 and 1987 by the Downtown Merchants Association of Clarksdale as a local business promotion and was held on the banks of the Sunflower River. In 1988 the merchants, with the Chamber of Commerce and other organizations, opted for a full-fledged festival, initially called the Sunflower Riverbank Blues Festival featuring Otis Rush, James “Son” Thomas, Jessie Mae Hemphill, Jelly Roll Kings, Jack Owens, Bud Spires, Boogaloo Ames, Othar Turner’s Rising Star Fife and Drum Band and others on three different stages. 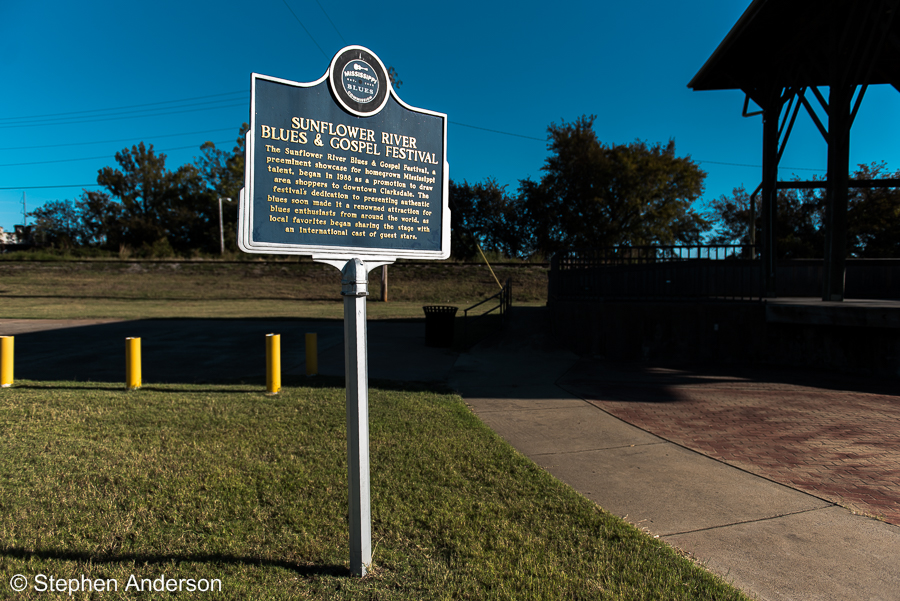 The second festival (1989), funded primarily by a group of individual donors including the late Z L Hill, owner of the Riverside Hotel, moved to Martin Luther King Park on the banks of the Sunflower River with a flatbed truck serving as a stage for musicians. The third festival (1990) was a tribute to Muddy Waters. That same year a group of volunteers from all walks of life with a mission “to preserve, promote, perpetuate and document the blues in its homeland” formed the nonprofit Sunflower River Blues Association (SRBA) and produced the annual festivals at various locations around town until the Delta Blues Museum stage was constructed across the river becoming its primary base. At that time the acoustic stage was transferred to one of the air-conditioned waiting rooms inside the renovated passenger depot. In 1992 the North Delta Academy of Gospel Music presented its first festival before joining the SRBA in 1993 to form the current Sunflower River Blues & Gospel Festival.

In 1996 Clarksdale officially became the international Sister City of Notodden, Norway, home of Europe’s largest blues festival. The Sunflower and the International Notodden Blues Festivals are sister festivals with Clarksdale musicians performing in Norway, and Norwegian musicians performing in Clarksdale. The Sunflower has also established a sister festival relationship with the Maximum Blues Festival in the Quebec Province of Canada.

In 2004 the Sunflower River Blues Association was awarded a Southern Arts Federation grant to present Big Bill Morganfield, son of Muddy Waters, as an educational program which took place inside the Delta Blues Museum. 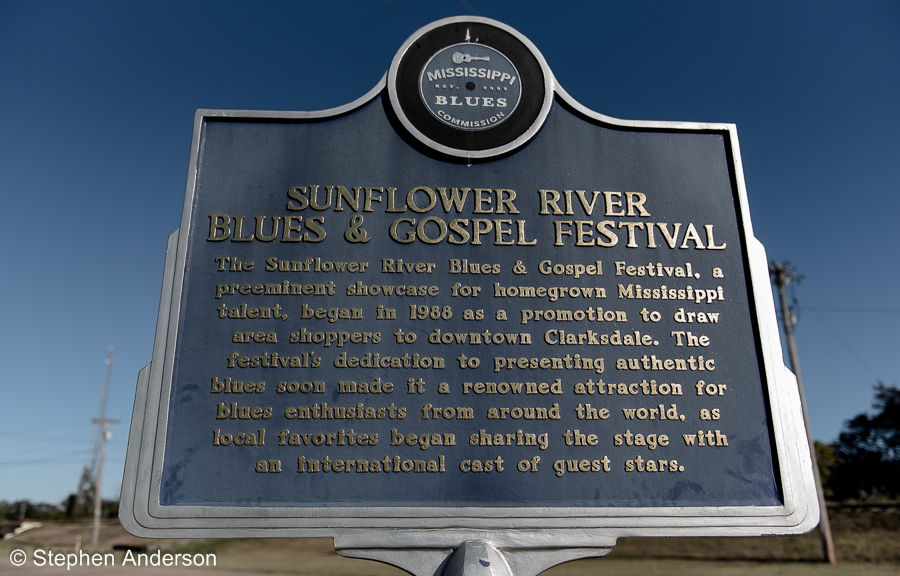 To recognize the efforts of those who have worked on behalf of blues and gospel, the festival began presenting an annual Early Wright Blues Heritage Award in 1991 in honor of the legendary Clarksdale deejay, followed by the Julius Guy Award, named for the co-founder of the gospel festival. Early Wright, “The Soul Man” of WROX radio who became Mississippi’s first African American radio disc jockey in 1947, presided over the longest continually broadcast radio show in America.

“Some see the world in black and white. Others see varying shades of gray. But, Mississippi taught the world to see … and hear … the blues.” – Mississippi, Believe it!

We invite our readers to follow the Southland Music Line as we continue to visit and bring you Mississippi’s most unique and influential sites that have contributed to the story and evolution of the blues and America’s music. 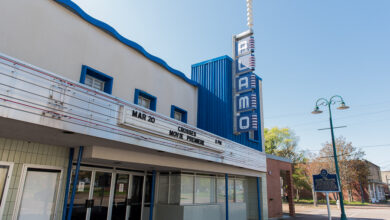