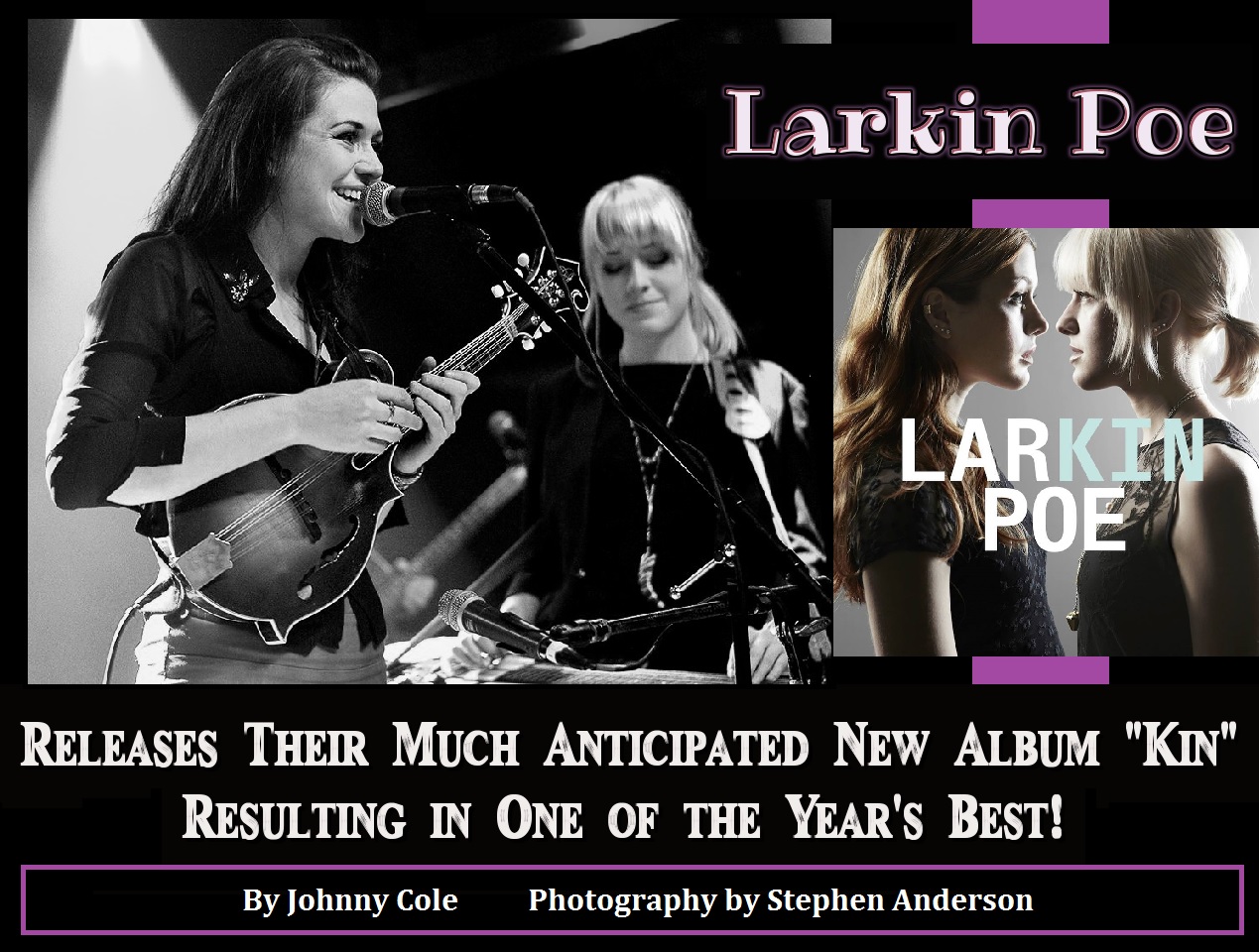 It’s easy to say that The Southland Music Line has been a huge fan of Larkin Poe for quite some time. For the last few years, we have been telling others just how impressed and enthusiastic we are about them. We have felt that bigger and better things had to be destined for the two sisters who front Larkin Poe, “Rebecca and Megan Lovell”. For many fans, one of the most anticipated albums of the year, Larkin Poe’s debut full-length album “Kin” has now finally been released.

The new album, “Kin” proves just what they’re capable of doing. Their musical roots as part of the Bluegrass/Americana sister group, The Lovell Sisters (with their sister Jessica) serves them well, but this album takes things to a different place and it’s refreshing and worthy of much attention. Their beautiful harmonies and first rate skills as musicians are still here, but this new album, produced by Chris Seefried ad Damien Lewis, captures something the music scene so deeply needs. It’s definitely something that could be seen as unexpected by many of their devoted fanbase, but I must add, what we are seeing before our very eyes and thankfully hearing is maturity. It’s a real joy to see this happening and the results couldn’t be anymore satisfying. Plus, I applaud them for being risk takers – and hey, it works. 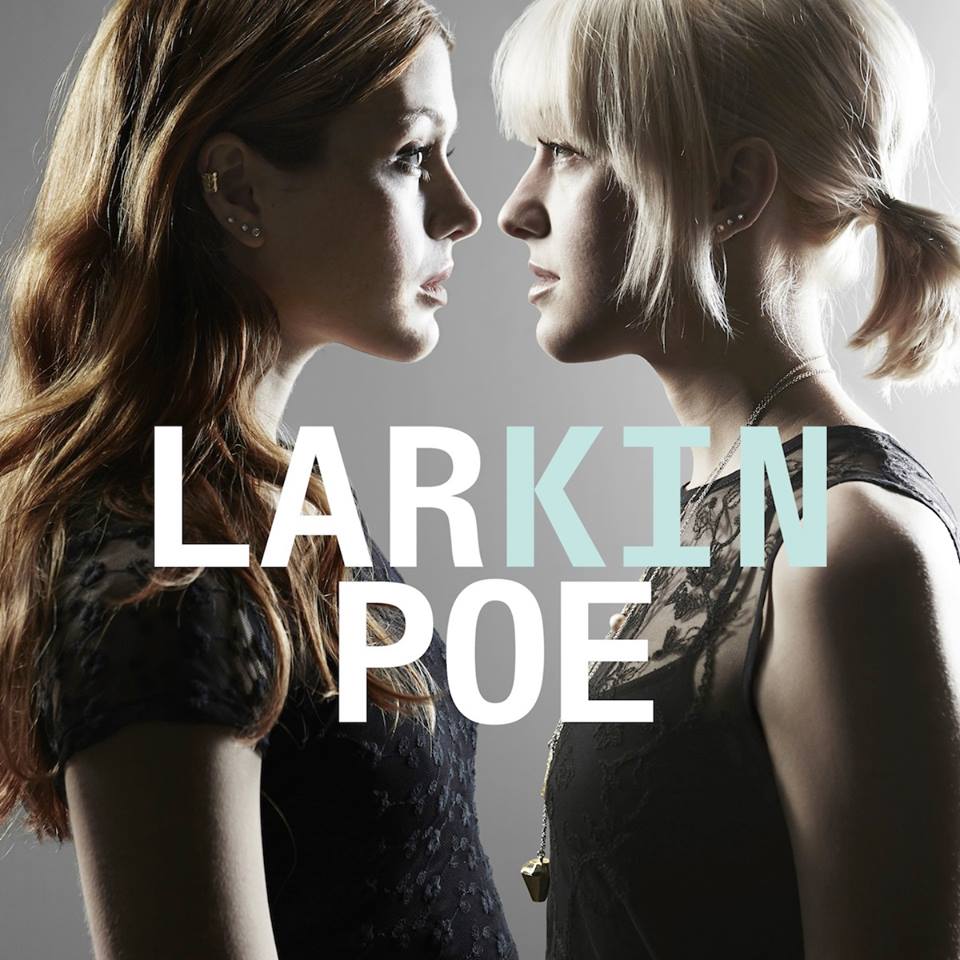 Larkin Poe has released several EP/Collaboration(s) and their unique folk-based sound has been enough to receive positive reviews and the attention from some mighty big names in the music business, including tours and performing with Elvis Costello, Conor Oberst and Sugarland’s Kristian Bush . A few weeks ago, they were seen backing Oberst as he performed on The Late Show with David Letterman. Europe has totally embraced them from their frequent trips overseas. This year following their performance, the British Sunday newspaper, The Observer, named Larkin Poe as the “best discovery” at Glastonbury Festival in Pilton, Somerset, England. The Huffington Post, American Songwriter and a number of magazines have given them impressive reviews and praise too.

The way I have always listened to new music or ‘tested it out’ is behind the steering wheel of my car -usually around 1 am. After a slow drive down the highway, “Kin” completely passed the test and I listened to it a few times before returning home. The songs are catchy enough to stay with you – having that lasting impression, which is one mark of a good song.

I personally liked each and every track and the direction taken met all my hopes. “Stubborn Love” is one of the standouts with Larkin Poe’s trademark harmonizing. The mesmerizing “Banks of Allatoona” pulls you in from its very beginning and it’s easy to get musically high on “Sugar High”. The beautiful final track “Overachiever” is the perfect way to close out what could easily be considered as one of the year’s best albums. There is even a Psychedelic Pop/Rock vibe to some of the album. Larkin Poe channels some obvious influence and styles from decades past, but provides us with something freshly their own. However you want to label “Kin”, there’s no doubt it works. I knew these girls (along with Robby Handley on bass and drummer Marlon Patton) could rock, not only because their amazing skills as musicians, but having seen them perform some lively rock classics like Fleetwood Mac’s “The Chain”, I knew fully this direction could break them out of the pack and be recognized for something extra special. I’m certainly not alone in thinking so and I can guarantee you that many whom I’ve discussed this incredible talent with, will feel exactly as I do about the new album. I cannot wait to discuss it with such ones. Plus, read the reviews of “Kin” as they come out.

Earlier this year, we were fortunate enough to see them perform a lively show at Atlanta’s Terminal West. They were kind enough to allow Robby Amonett (artist and contributor to “The Line”) to paint their performance and “The Line’s” photographer Stephen Anderson to take an abundance of photos. Following the early 2014 show, we were happy to do an article, which received much good public feedback for us. We are so appreciative to Larkin Poe and we hope you’ll check out the earlier article: “The Line” Travels to Atlanta to Meet Larkin Poe. 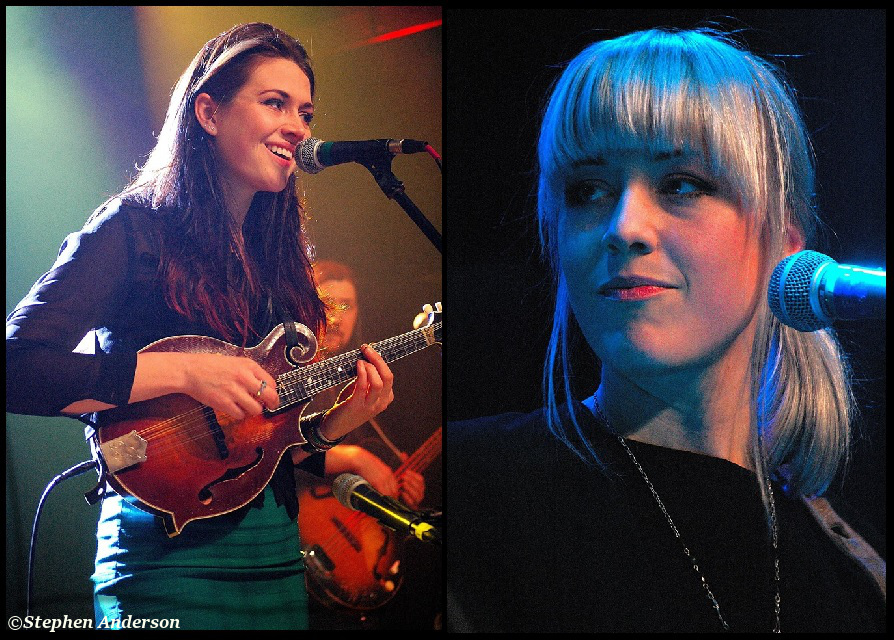 Rebecca & Megan Lovell (Larkin Poe) performing earlier in 2014 at Terminal West in Atlanta, GA.  This popular venue welcomed them back on Oct. 24th for an Album Release Party for the album “Kin” (Photos by Stephen Anderson)

In this fickle music marketplace, it’s always uncertain what will click with the public. Larkin Poe has many things in their favor as discussed in our earlier article, but now after listening to their album “Kin”, I believe they’re on their way. I’m going to go out on a limb, my honest feeling is they will become one of music’s biggest successes over the coming months or next couple years. Of the 200+ shows we’ve seen so far this year, they along with The Lone Bellow and a handful of others have provided us with some of the best live music of 2014. Now the release of this amazing new album just tops things off, so we highly suggest you get the new release and by all means see them live! 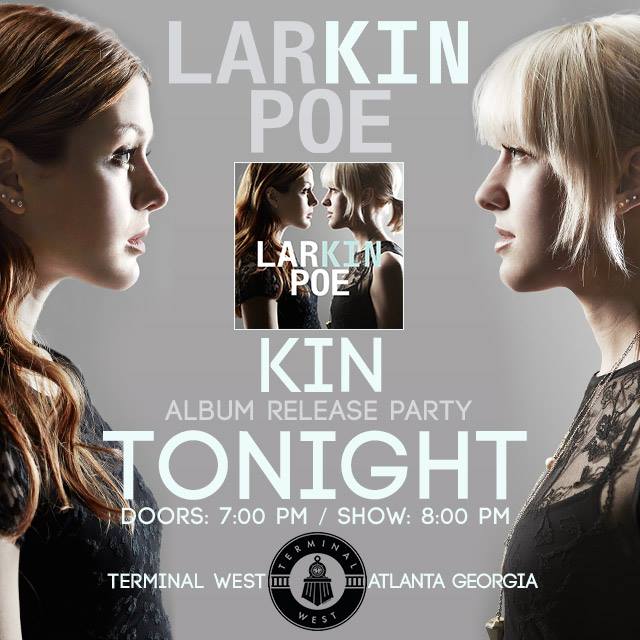 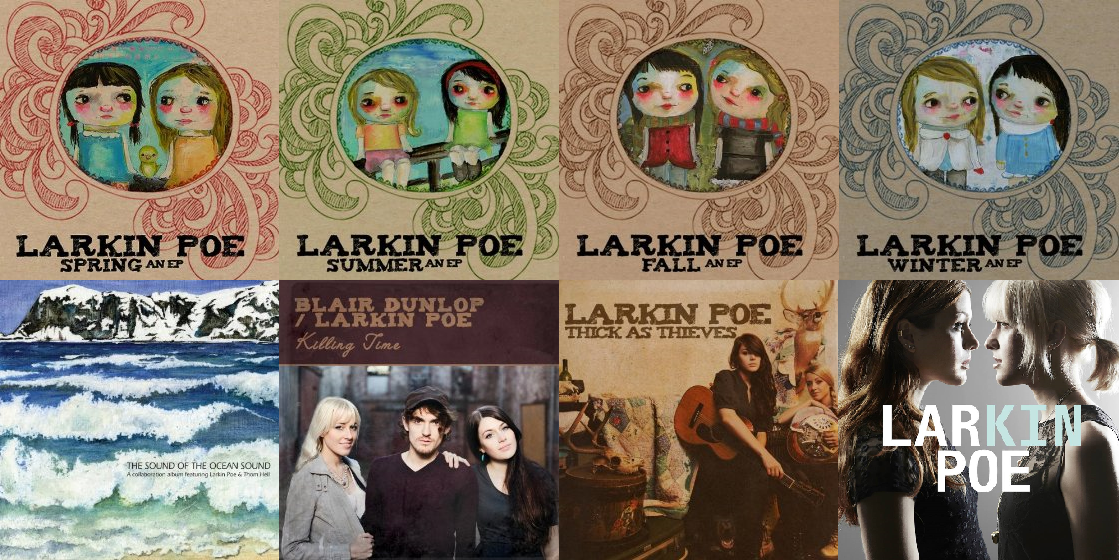 To Purchase Their Music (Including “Kin”)
iTunes
Amazon 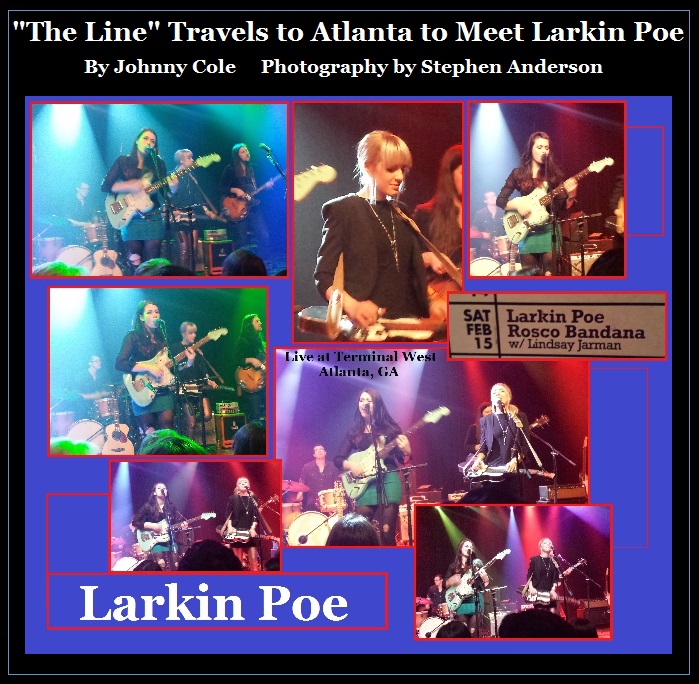 “The Line” Travels to Atlanta to Meet Larkin Poe