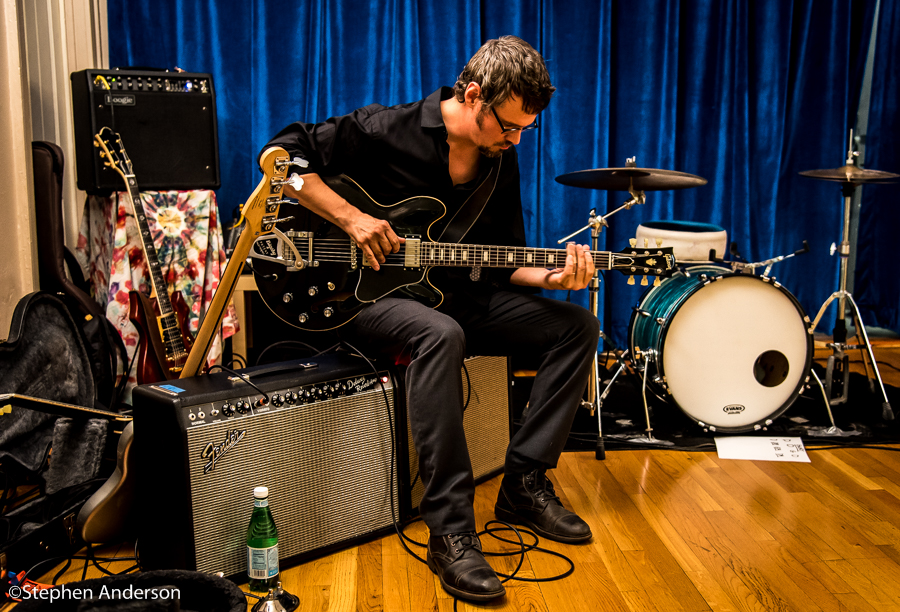 An Article by Brenda Germany
Photos by Stephen “Andy” Anderson

“I was just obsessed with the inspiration that art gave me. I’ll be working on it for the rest of life – I’ll always be working on it.” Mississippi Hill Country Blues guitarist and vocalist Luther Dickinson, of the famed North Mississippi Allstars, admittedly has a passion for not only the Blues, but, also, for Ocean Springs artist Walter Anderson’s “Seven Climates of Ocean Springs”. In September 2018, The Southland Music Line had the pleasure of attending Dickinson’s third musical suite in the series based on Walter Anderson’s beautifully detailed paintings of coastal wildlife, nature and inhabitants. Gracing the walls of the Ocean Springs Community Center, this celebrated work is described by Anderson as the “Seven Climates,” in the sense of “a belt of the earth’s surface contained between two given parallels of latitude”- namely Ocean Springs, MS. His lushly, expansive murals conjoin each season with a harmonious planetary body: the Sun, Jupiter, Mars, Mercury and the Moon, Saturn, Uranus and Venus.

Originally born in Tennessee, Luther Dickinson moved with his parents, Mary Dickinson and well-known Memphis musician and producer Jim Dickinson, to the North Mississippi Hill Country in 1985. There, he and his brother, Cody, cultivated their promising musical talents while listening to Otha Turner’s Fife and Drum Blues band and Junior Kimbrough’s guitar prowess. Making his recording debut at age 14, Luther progressed to work with such outstanding artists as Mojo Nixon, Toy Caldwell (Marshall Tucker Band), Beck, Billy Lee Riley, John Hiatt, George Porter and the Dirty Dozen Brass Band prior to forming the acclaimed North Mississippi Allstars band with his brother. Luther later produced two of Otha Turner’s albums “Everybody Hollerin’ Goat” and “From Senegal to Senatobia” before receiving six Grammy nominations for his own albums.

Undoubtedly attuned to the theory that each of the seven planets featured in Anderson’s paintings produce their own distinctive tone and in combining together create celestial music, Dickinson draws on his deep musical roots to write each “Season’s” unique composition. He invites fellow musicians to collaborate with him in each year’s performance, taking their inspiration from Anderson’s much-loved work. This year Dickinson united the talents of trombonist Big Sam (Big Sam’s Funky Nation), sousaphonist Kirk Joseph (The Dirty Dozen Brass Band), vocalist and granddaughter of Otha Turner, Sharde “Fifemastor” Thomas (The Rising Star Fife and Drum Band), and, as always, legendary New Orleans drummer Johnny “V” Vidacovich to weave this third spectacular musical tapestry for the “Seven Climates of Ocean Springs”. Also taking part were local favorites Blackwater Brass (including museum Dir. of Development, Corey Christy) and the Rock U2 dance troupe.

In addition to many familiar and original songs in the New Orleans and Hill Country Blues tradition, our audience was treated to a reading of Walter Anderson’s short story detailing the courage of a particular frog in pursuing “the sweetest and most seductive frog voice he had ever heard” in order to be near that beautiful music on the other side of the road. Walter Anderson’s son, John, explained, “Our father didn’t want us to be afraid of the world, so he wrote stories to help us be brave.” To conclude the evening of inspiring and spirited music and dance, Luther and his fellow musicians led the audience in a joyful New Orleans style “Second Line” procession throughout the Community Center to “When the Saints Come Marching In”. Dickinson said of the event, “Everybody there was just so happy and friendly. It was cool seeing families dancing and getting involved. It was beautiful, man.” 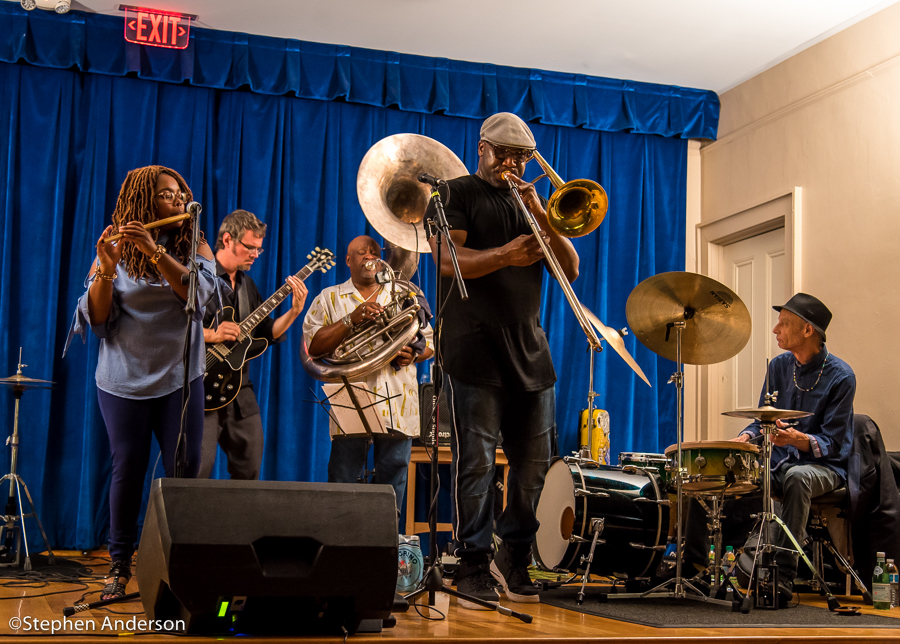 The Line would like to thank Walter Anderson Museum Manager, Bea Ketchum and Director of Development, Corey Christy for their kindness and hospitality, and all those who had a part in organizing this wonderful event. We encourage our readers to join us in 2019 to attend the next chapter in this exceptional seven part series combining outstanding music and cherished art.

We now invite you to enjoy two pages of photos taken at event by Stephen Anderson. 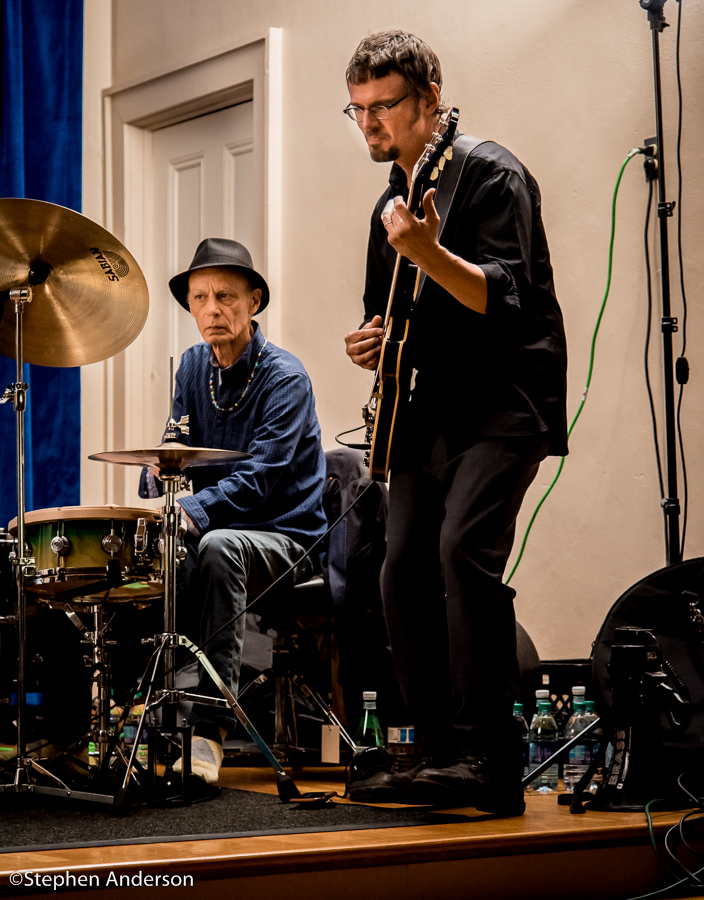 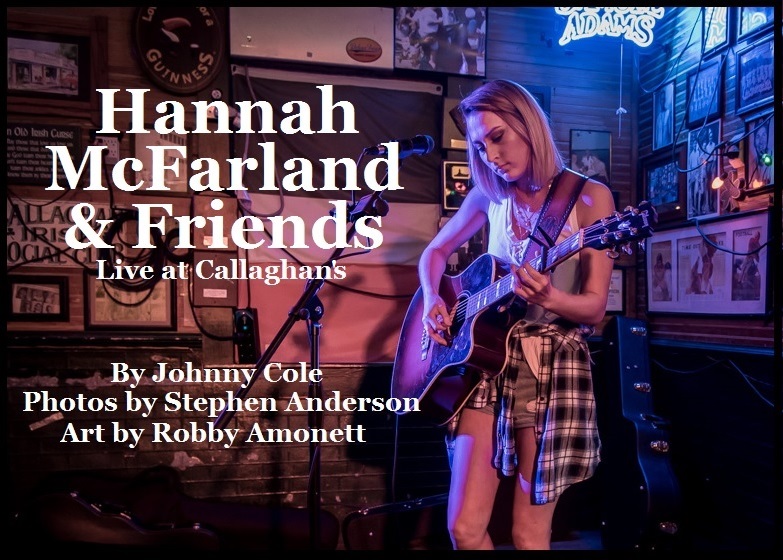 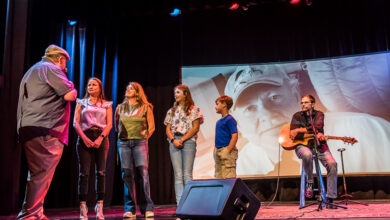 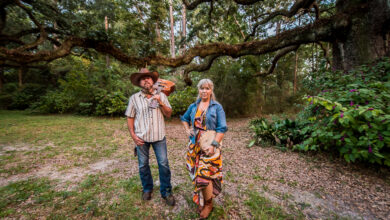 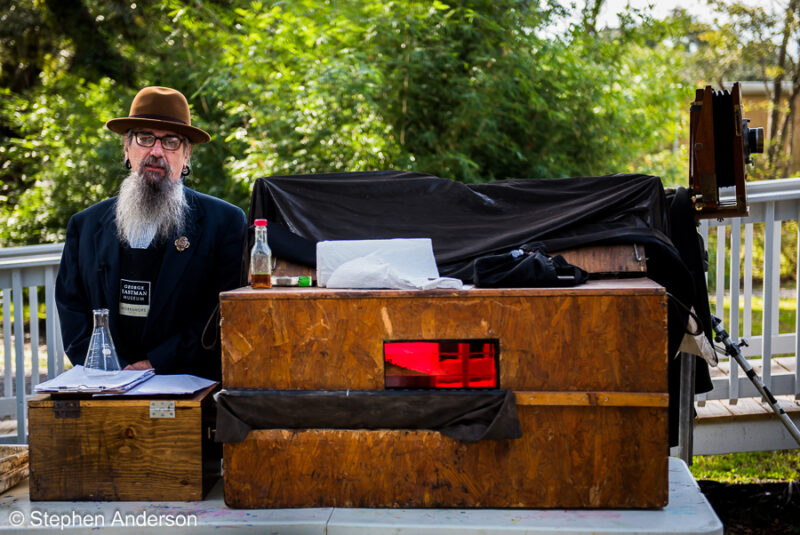