Robby Amonett, an artist with a love for music, has painted the performances of hundreds of bands/musicians from all over the country. His travels have taken him from The Gulf Coast and New Orleans to SXSW in Austin, TX to Atlanta, GA to paint a wide range of up-and-coming artists such as the sensational Larkin Poe. The list of names of those he has painted is quite extensive and impressive: Alabama Shakes, Todd Snider, Will Kimbrough, Hurray for the Riff Raff, Wet Willie, Soul Asylum, Bobby Rush, Billy Joe Shaver, Steve Forbert, Blue Mother Tupelo, Willie Sugarcapps, Sugarcane Jane, Cary Hudson, Rosco Bandana, The Revivalists, Grayson Capps and a list that goes on and on. He has gone on the road with such bands as Banditos, one of the most touring and often mentioned bands on the Southern music scene today.

Robby Amonett demonstrating how he paints the live performances of musicians. Here is with musician, Kennon Barton. (Photo by Stephen Anderson)

Presently, his work can be seen in a very special art show exhibit entitled: “Scenes of a Scene”. It’s being shown at Mississippi Coast Community College – Jefferson Davis Campus in Gulfport, MS and will remain on display through Oct. 18th. On Thursday, Sept. 18th, he gave a public demonstration of how he paints a musician during a performance. Those in attendance were able to see him paint a local musician – Kennon Barton’s performance. That piece of art is also presently on display. 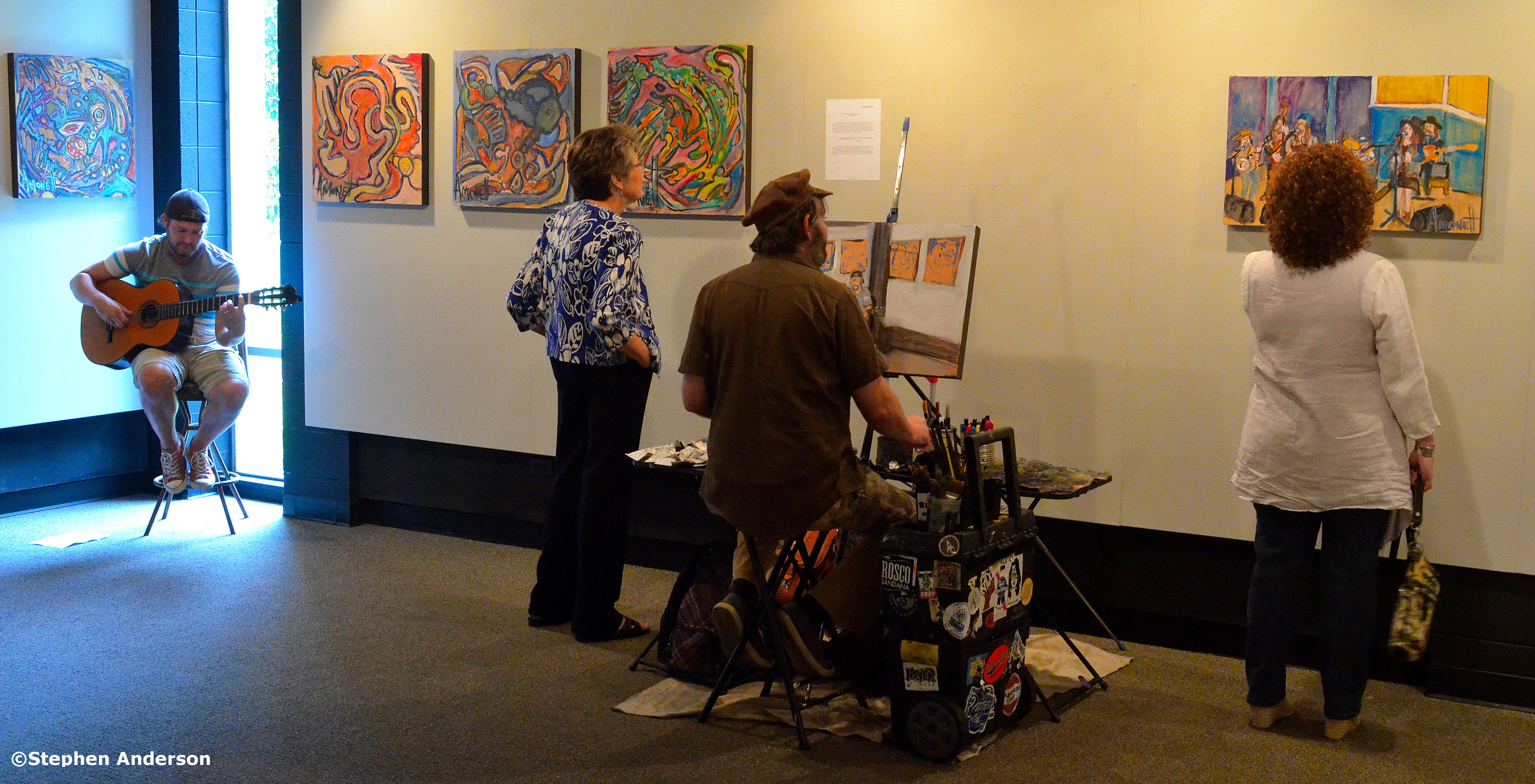 Robby Amonett demonstrated to the public how he does his art. Robby can be scene doing what he loves in a multitude of venues around the South. (Photo by Stephen Anderson)

The art show features many paintings of the musicians he has painted. Plus, a very special collection of studio paintings he has done called “Visions of Jazz: Sound of Color”, which features paintings of Louie Armstrong, Miles Davis and others. Another unique addition to his exhibit is his painting collection: “Synthesis 0f the Soul”. 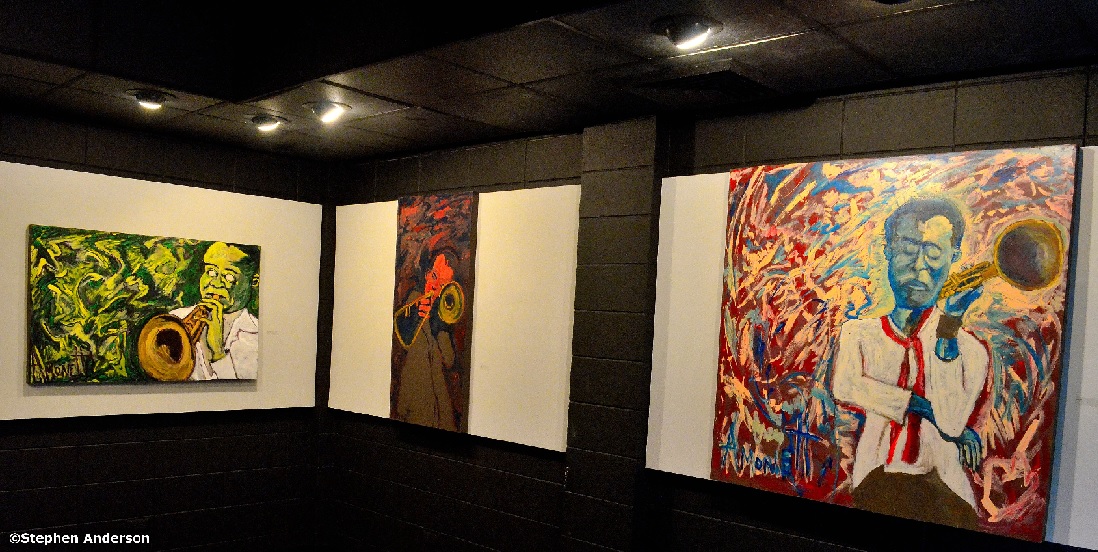 Robby Amonett’s “Visions of Jazz: Sounds of Color” is one of his most popular and admired collections. (Photo by Stephen Anderson)

Robby Amonett, a Mississippi Gulf Coast native and former rodeo bull rider that studied painting at University of Montevallo, has a long unique history. He is considered a friend to many and serves as an inspiration to fans of both music and art. The Southland Music Line considers him an important contributor, but most important ‘our friend’. We love that he is getting recognition from various magazines, newspapers and websites. He has been featured in the Sun Herald, Southern Rambler and many other places – Well deserved! 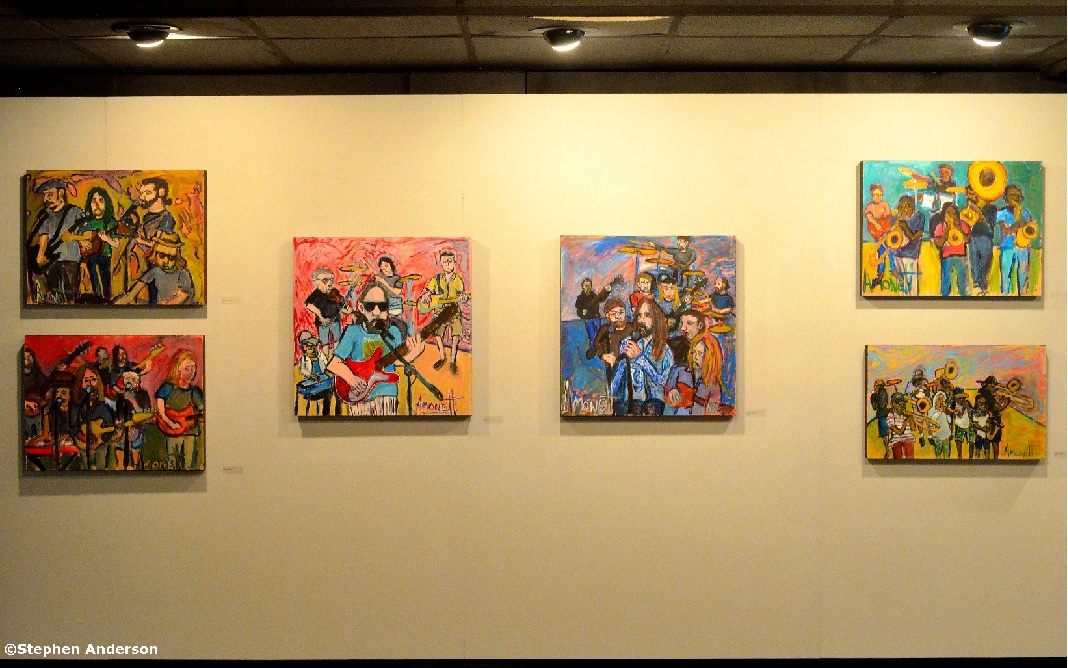 Amonett has painted the live performances of hundreds of musicians. The art show contains many of those pieces. Often, the pieces of art are sold on location or the time of event. (Photo by Stephen Anderson)

DETAILS OF THE SHOW

Be sure to catch his art show! Also sign the guest book at the main entrance of the exhibit. 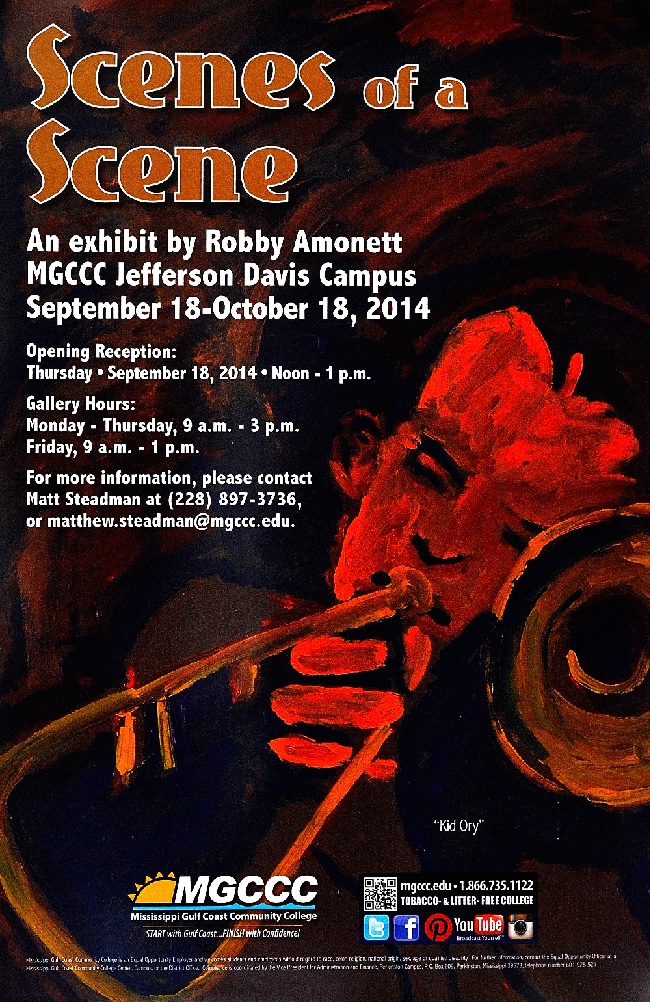 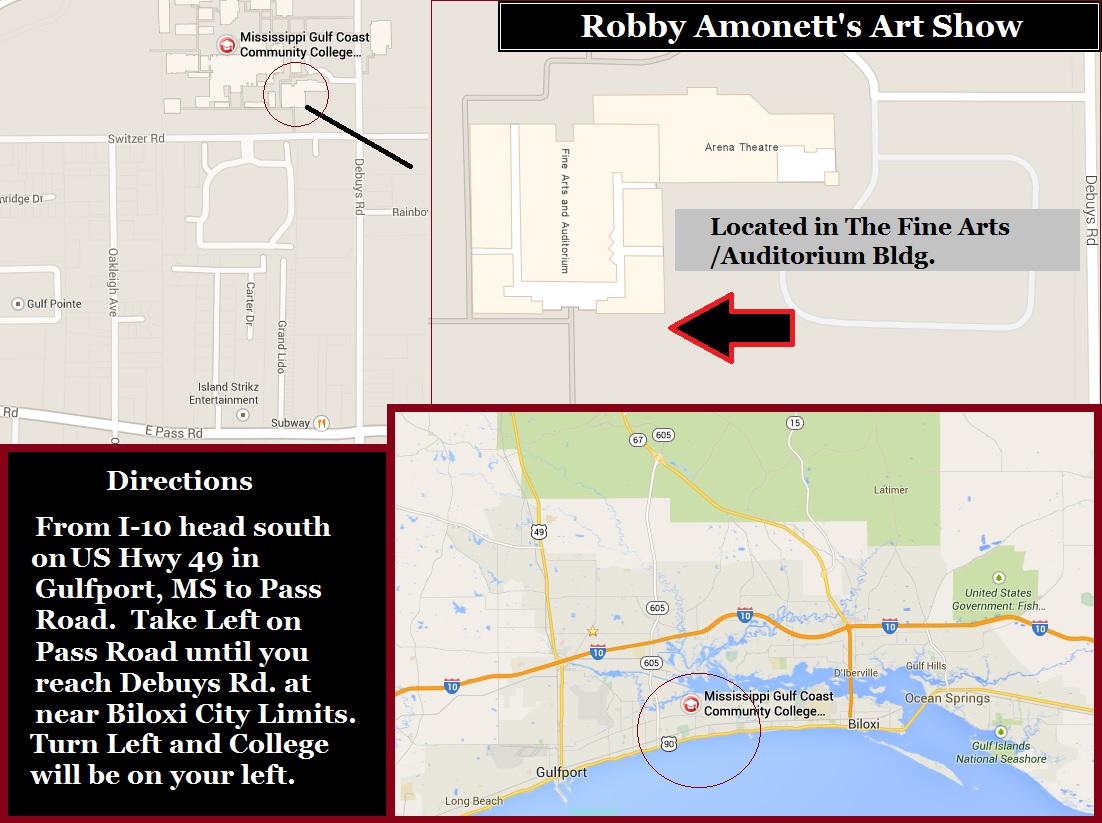 To Purchase the Art of Robby Amonett:

He can be contacted at Robby@TheSouthlandmusicline.com
Robby Amonett at Facebook
Or The Southland Music Line (Office # 228.826.3046)